Monthly Commentary - A January to Remember

ARE SHORT SELLERS VILLAINS OR HEROES?

Ringing in the New Year on December 31st, how many of us toasted to something along the lines of a “calmer, saner year to come?” January did not cooperate.

Though it’s difficult to distill the month down to a handful of key events, there were four that stood out from our perspective: the steady increase in velocity of the COVID-19 vaccine rollout, the protest at the U.S. Capitol; the transfer of power to the Biden administration; and the intense market volatility in late January, best encapsulated by the wild ride taken by “meme stock” investors.

As seasoned market participants, we know, the predominant narrative can shift quickly and severely, and we witnessed that phenomenon unfold in extremely short order in late January as many investors piled into several high short interest stocks. At various points, it was thought to be driven by retail trading activity; then it was a populist uprising against hedge funds; then it was, well, possibly hedge funds versus other hedge funds; then it involved silver for some reason; but throughout, the black hat, the villain in this story was cast as the short seller.

In our experience, investors’ tendency to anchor on the most recent market action, oftentimes can lead to major allocation mistakes. Once upon time, think long back to 2009, investors had an insatiable appetite for long/short strategies, which history has proven was the exact wrong time to do so. In fact, the New York Times bestselling book in 2010, Michael Lewis’s “The Big Short” portrayed short sellers as heroes (they made a movie about it a few years later). But now, shorts are the evil doers? Apparently, Netflix is even scripting a movie on the Wall Street Bets and GameStop events. You’ll excuse us if we think that narrative is unlikely to hold up over the long-term, particularly since market conditions include all-time high equity prices with valuations near peak multiples, “high” yield bonds dipping below 4%. Notably, retail activity has picked up significantly with highly speculative trading through no commission discount brokerage platforms.

One could argue we need short sellers now perhaps more than ever. FINRA margin debt has risen, and retail trading has seen an increase in volumes, with a notable change in derivatives activity. 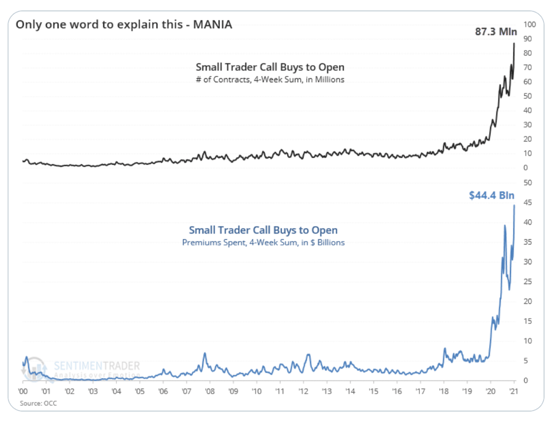 In response to the GameStop-related and -adjacent volatility we adjusted our short portfolio very modestly; most notably, we covered 1-800 Flowers.com which had the highest short interest in our short book at 22% short. On the long side of our book we saw a number of positive developments during the month. FLIR Systems was acquired by Teledyne. The RV maker Thor Industries performed well during the month, as the industry continued to be the beneficiary of large numbers of people who want to travel but who do not want to fly to do so. For the top 10 holdings in LBAY, click here.

NextEra Energy Partners, which owns and manages contracted clean energy projects, primarily in wind and solar, also experienced a strong January, due at least in part to the new administration policies that should be very positive for their business.

This brings us back to the non-GameStop headlines for January, which in our view are going to be far more impactful for our investment strategy and our focus on identifying opportunities to deliver strong shareholder returns. Coupling the vaccine rollout with the policies and orders of the new administration, we expect these two factors will have significant impacts on a number of sectors, including energy, infrastructure, manufacturing, technology, and much more. We are identifying new opportunities on both the long and short sides of our book.

In summary, our calmer, saner 2021 may not have arrived, but amidst the chaos we see a highly constructive setup for long/short strategies, and we look forward to continuing our efforts and our dialogue with investors as the year moves along.

"
One could argue we need short sellers now perhaps more than ever."

1The performance data quoted represents past performance. Past performance does not guarantee future results. The investment return and principal value of an investment will fluctuate so that an investor’s shares, when sold or redeemed, may be worth more or less than their original cost and current performance may be lower or higher than the performance quoted. Performance current to the most recent month-end can be obtained by calling (833) 417-0090. Short term performance, in particular, is not a good indication of the fund’s future performance, and an investment should not be made based solely on returns. Returns beyond 1 year are annualized. View LBAY standardized performance here.